In Silicon Valley, a tender offer that allows longtime employees at high-performing startups to get some liquidity is fast becoming an expected benefit. While secondary stock sales have always been possible, their popularity—and legitimacy—has soared in the past 10 years as successful companies put off IPOs in favor of staying private.

Ryan Logue is COO of Nasdaq Private Market and was a long time employee at SecondMarket, a pioneer of organized secondaries, which Nasdaq acquired in 2015. He’s watched from the front row as secondary sales evolved from uncontrolled free-for-alls to something structured and organized. He’s seen an entire ecosystem emerge, one that now includes regulations, tools, and lawyers, as well as investment funds geared towards buying common shares.

He recently talked to us about the history of secondary transactions in the private market, key moments, and what lies ahead. The conversation has been edited for length and clarity.

What’s the origin of secondary sales?

Prior to the financial crisis in 2008, there wasn’t a huge need for stockholder liquidity in the private market. Companies would typically IPO before many of their employees had fully vested their options or the early investors needed to sell their stakes and wind down their funds. That all changed with the liquidity freeze that hit in 2008 and 2009. With companies deciding to wait out the dead IPO market and preferring to stay private longer, an opportunity emerged for investors to buy stock from private-company stockholders that were looking for partial liquidity. 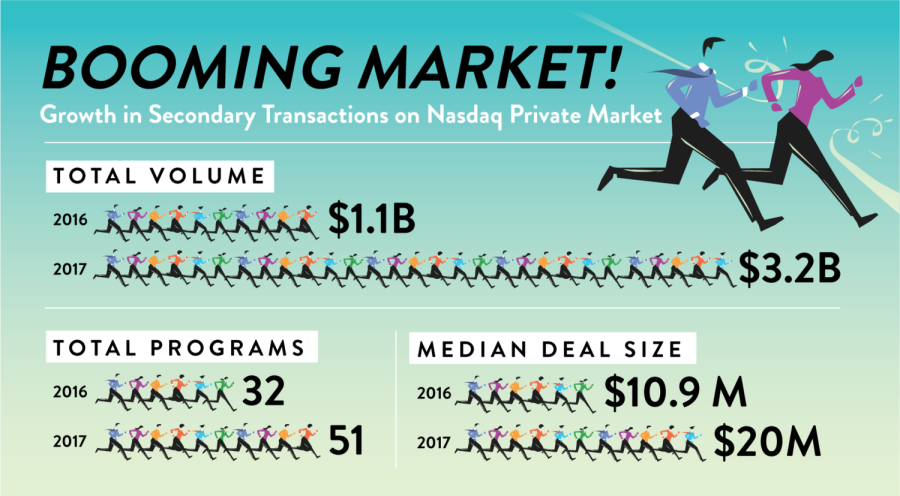 The timing of this liquidity crunch worked out perfectly for SecondMarket. Barry Silbert, SecondMarket’s founder, had identified a need for liquidity in other esoteric assets in 2004 and left Houlihan Lokey to solve the problem with a new brokerage startup.

Starting first with restricted stock and then moving into other asset classes, like auction rate securities, SecondMarket was perfectly positioned to help facilitate private company trades when they were first approached by Facebook shareholders in 2009. Those early trades built the foundation of a highly active market that would thrive until Facebook’s IPO in 2012.

When did the popularity of secondary markets increase?

After the 2008 financial crisis, tech IPO’s became incredibly rare. At the same time, private companies like Facebook were getting huge valuations in the private market, but there was no easy way for their employees with common shares to sell. Because Facebook was such a big consumer name, investors generally felt comfortable buying on a secondary market. The rise of firms like SecondMarket and SharesPost allowed buyers and sellers to transact in name-brand companies, such as Facebook and Twitter and helped drive increased activity in the private market.

In 2008, how did people value illiquid assets?

The best proxy is the last preferred round. In Facebook’s case, Microsoft had just invested, and people looked at that valuation and discounted it for the common shares. As the market started to become more liquid and more people were selling, there was more price discovery.

It got to a point in late 2010, where SecondMarket started running weekly auctions. Sellers would list their stock and buyers would list their interest. By using a reverse Dutch auction, SecondMarket could set a market price for these transactions. While this was a positive move for shareholders, many companies wanted to avoid having continuous trading in their stock. Companies’ focus on controlling the cap table led SecondMarket to launch the first version of the tender offer product that NPM continues to operate today.

What are the important landmarks that affected secondary transactions?

There were some important IPOs that increased the rate of secondary adoption by investors and companies. When the IPOs did well and investors made money off their secondary purchases, they were more likely to go back into the secondary market and buy more private company shares.

In 2011, LinkedIn had a great IPO, and the investors who got in early were able to make a solid return. That success gave them the leverage to raise more money and invest it back into the private market.

Of course, the IPO market has not been all positive for investors in the secondary market. The disappointing performances of Groupon and Zynga have both been cautionary tales for private-market investors that never had the opportunity to get liquidity at a higher price.

How has the process of secondaries changed?

The secondary activity in Facebook resulted in a lot of companies changing their bylaws to restrict trading activity, either by explicitly blocking sales or making it more difficult to sell.

While it used to be the Wild West, now companies insist on structured secondaries. They don’t want employees selling to unknown investors like what was happening on SecondMarket and SharesPost in the early days. A lot of companies now have insider trading policies, transfer fees, prohibitions, or more aggressive rights of first refusal to block unwanted sales. Companies put in such various roadblocks and milestones they felt were appropriate in order to prevent investors from buying and flipping their stock within the private market and ensuring that shareholders aren’t selling to people the company doesn’t know or trust.

However, private companies still needed to find a way to give their employees some liquidity while maintaining control. They started bringing in investors who would buy a big chunk of stock from a large number of employee shareholders, which led to the beginnings of company-sponsored secondaries.

As the demand for liquidity increases from their shareholders, companies are increasingly pressured to organize liquidity programs. However, these programs can become a nightmare for companies to facilitate and track. Companies and their law firms need a way to put everything online and view it in real time. Having an automated way to do this, like those services offered by Nasdaq Private Market, makes it possible for companies to manage tender offers, which in some cases involve several hundred or even thousands of shareholders.

Why are companies staying private longer?

There were a lot of people that wanted to stay private longer because they weren’t excited about the public market glare that comes with an IPO. Tech companies like to move fast without public scrutiny. When the JOBS Act came out, companies were able to stave off going public because of the significant increase in the shareholder cap to 2,000 shareholders. Prior to 2012, a company would have to begin filing public after it gained 500 shareholders. Post JOBS Act, companies were put in the driver’s seat on deciding the timing of an IPO.

Currently, there’s a new wave of funds that invest in these late-stage rounds. When a group like Softbank Vision Fund puts half a billion or a billion dollars into a single deal, it takes the pressure off in a way that used to only be solved by an IPO. The company has enough money on the balance sheet to put off an IPO for two to three years, and none of the investors are clamoring to go public to get their money.

Companies really didn’t have secondaries on their radar before 2008. But in the last five years, it’s almost entirely flipped: Everyone is planning for a secondary.

A big driver for secondary transactions is completing a large primary round where either the company has a lot of money on its balance sheet and wants to minimize dilution or the investor didn’t get all the equity it wanted and needs a way to make up the difference. An effective way to accomplish either of these goals is through a broad-based tender offer to existing shareholders.

How investors feel about secondary transactions has evolved considerably as well. While venture investors certainly don’t want employees selling their entire stakes in the company, they now clearly understand the need to allow partial liquidity. Since it can take 10 to 12 years to go public, private companies need to provide interim liquidity to retain their employees. This is clearly backed up by the numbers, as ninety percent of our transactions in 2017 involved current employees. The company’s main motivation is to let their employees realize some of the value of their equity while imposing sell limits that help keep employees aligned with the company.

The secondary market has evolved so rapidly that it’s difficult to project out too far into the future. The trends we are seeing today point to massive geographic expansion in the market as private companies across the globe start to become more comfortable with raising private capital and delaying a public offering. This changing landscape has led to NPM completing transactions in 21 states, in addition to Canada, Europe, and South America and doubling its transaction volume in the past two years. We anticipate that the global expansion of this market will continue to accelerate in the coming years.